See the latest changes below for all changes!

This new rewrite will eventually replace the old version, but currently this alpha is still in heavy development. Despite that, it has more or less feature parity with the old version with the scope of having many new features in the future as it’s developed. You’ll notice though that there are already a lot of quality of life improvements and a much more flexible UI.

Some initial main differences in this new version:

On the roadmap for future Alpha versions:

They’re the main features to implement for Alpha along with bug fixes as they arise. That will then mark the beta release where I’ll have more planned features leading up to a full release.

The original version is still for sale as it helps support development for the new version, and it will remain the more stable version for now, plus it also has a lot for effects available – the new version will not be able to load old effects files as they’re incompatible (I may do some kind of converter in the future). The new version will be free and instead I’ll be selling premium effects packs (there will be free effects also available still!) of which I’ll be offering discounts to anyone who purchased the original version.

This version is currently Windows only. Mac will come at a later date but isn’t a priority just yet.

Please give this version a test and let us know any bugs or other issues you find on the forums, or email alpha@rigzsoft.co.uk
Current version: Alpha 4. For the latest changes see below. Installation instructions: Download the zip file, and extract somewhere suitable on your PC. Then simply run TFXEdtior.exe.
Latest Changes
What’s new in TimelineFX Editor Alpha version?
21.06.2021
* Graphs now have options to set presets, including generating sine and square waves.
* There’s now a tool tip that shows the full path of the effect library when you hover over the tab title.
* Fixed a crash relating to graphs and generally made them more stable overal.
* Spawning particles between positions is now more smoother, especially noticable with trail type effects.
* Fixed a bug where switching emitters could result in invalid graphs being selected.
* Undoing back to the initial commit keeps focus on the graph if that was the change being undone.
* Added Trail Preview Mode to settings menu. This makes the effect move about the screen automatically which can be useful when designing trail type effects.

06.06.2021
* There are now preset Gradients and colours for the color overtime color picker.
* Simple preset effects to quickly get started with a new effect. These are available when you add a new effect or emitter to the library.
* Fixed a bug where clicking export animation didn’t do anything on the first click.
* Arrow keys can now be used to navigate the effect library.
* Fixed an occasional crash when cloning an effect.
* Fixed a crash when opening a library that has no shapes.
* Changed the default shape (when no shapes are available) to a flare type shape so that the preset effect previews look a bit better.

06.05.2021
* Fixed a graphics bug where particles would just draw on top of each other on some graphics cards.
* Altered a compiler option for more compatibility.

03.05.2021
* Proper seamless texture preview when the seamless option is checked in the animation tab
* Graph removed to prevent crash when loading an effect library.
* Fixed crash when clearing unused shapes.
* Save as now removes the dirty flag (*) from library name.
* Property tab now has default focus when opening the editor.
* Issue with line emitter’s length corrected.
* Seamless wrapping issue on some effects fixed (due to none centered emitter handles)
* Clone now uses Vn for the copy names
* Fixed bug with moving the order of subeffects and emitters.
* Cloning emitters in sub effects now clone properly within the sub effect, not the root effect.
* Name of exported animation now defaults to the name of the effect in the library being exported.
* Clicking any of the options on the animation no longer closes the popup after updating the effect.
* Fixed crash after creating a new effect library and importing a shape.
* Fixed issue with the colour gradient where it was hard to edit the first colour on the graph.
* Cloning effects after creating a new library was not properly creating a separate effect.
* Fixed a crash when adding an emitter.
* Frame and frame sizes on the import shape popup no longer allows the values to go to 0.
* History now auto scrolls to the most recent change.
* Looped animations for exporting now works better when single spawning emitters are present.
* (library change) – Replaced random number generator with a much faster one.
* Angle changes in history now show as degrees not radians for convenience.
* Toolbar icons now have tooltips.
* History list optimised to only draw the visible items.

07.04.2021
* Rewrote the gradient editor for colour overtime so it’s more easy to use now.
* Fixed a crash bug when editing graphs due to the new undo implementation.
* Fixed an issue with sub effects not being updated in properly if they had size variation.
* Graph is reset after opening a new library
* Fixed crash when clearing unused shapes
* Save As now properly removes the dirty flag
* Property tab now has default focus

19.03.2021
* History tab implemented for undo and effect revisions so you can easily go back on recent changes.
* Revisions can be saved as a separate effect.
* Copying effects now appends v1,v2,v3 and so on with subsequent copies.
* Added Direction Overtime graph which was missing.
* Deleted effects are now saved under Edit menu > Recently Deleted Effects in case you need to get them back. Undo will also restore the last deleted effect as long as the delete was the last action.
* Graph curves for angles now properly adjust for radians (the display is in degrees but the actual value for angles is stored in radians).
* Graph data is now more efficiently stored. 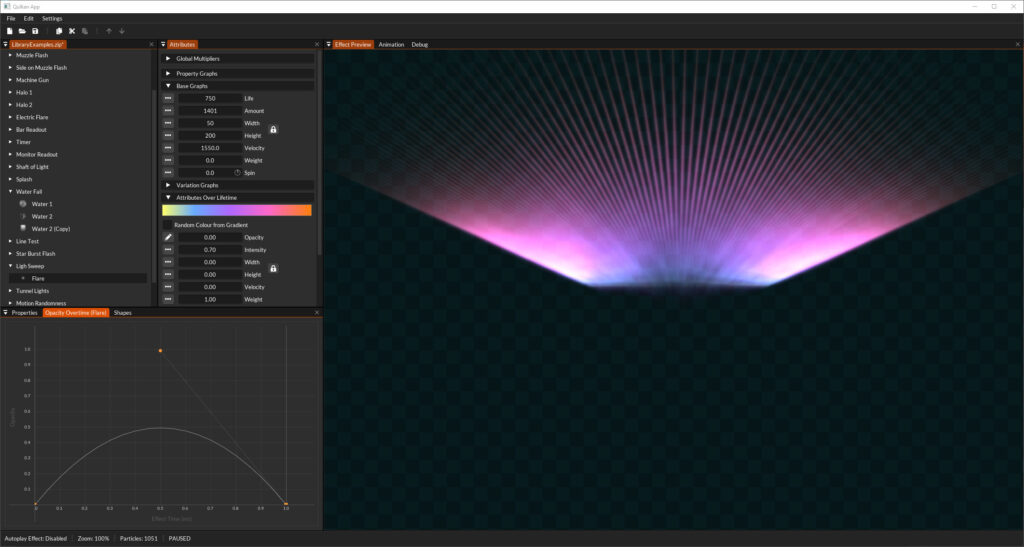 Windows 7 greater. Vulkan capable GFX with at least 256MB. These system specs are currently largely unknown, although Vulkan capable is definitely a must! Please report if you have any issues.