I just uploaded Alpha number 5 which ticks off another feature I had planned for the alpha stage – the ability to setup graphs from a number of presets, including bell curves, s curves and simple linear slopes etc. In addition to that you can also generate a sine or square wave as well which is great for modulating attributes such as size and opacity but it can also be great to just experiment with all the other attributes as well, especially the overtime attributes.

There is also a new option under the settings menu: Preview Trail Mode. Activating this mode will move the effect about the screen automatically which is useful for when you’re designing trail type effects and you don’t want to keep dragging the mouse about to see what it looks like.

* Graphs now have options to set presets, including generating sine and square waves.
* There’s now a tool tip that shows the full path of the effect library when you hover over the tab title.
* Fixed a crash relating to graphs and generally made them more stable overal.
* Spawning particles between positions is now more smoother, especially noticable with trail type effects.
* Fixed a bug where switching emitters could result in invalid graphs being selected.
* Undoing back to the initial commit keeps focus on the graph if that was the change being undone.
* Added Trail Preview Mode to settings menu. This makes the effect move about the screen automatically which can be useful when designing trail type effects.

Give it a try and let me know any bugs! 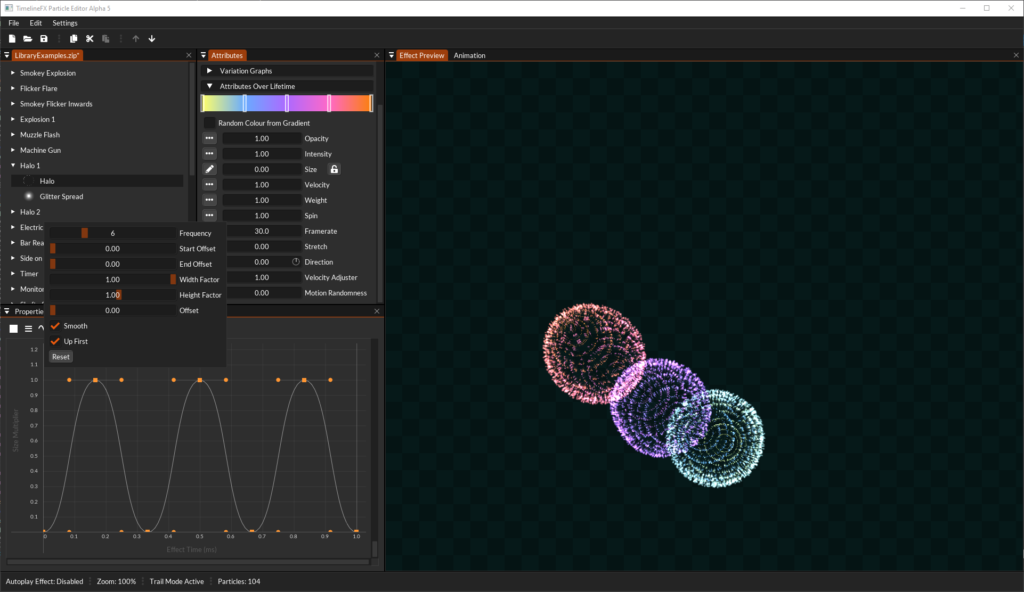